Before fighting Red Eye itself, an attacking base, named Rafflesia, is encountered. Rafflesia attacks similarly to the Cranassian Module in Raiden II.

After destroying Rafflesia, Red Eye appears. It fires many bullets in dangerous entrapment patterns, as well as launching exploding mines that release aimed shot spreads at the player. 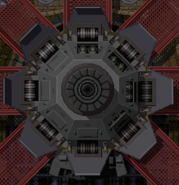 Retrieved from "https://raiden.fandom.com/wiki/Red_Eye?oldid=6011"
Community content is available under CC-BY-SA unless otherwise noted.