Raiden V (雷電V Raiden Go) is the latest entry in the Raiden series, released on February 25, 2016 for the Xbox One in Japan. A "Director's Cut" was published for PlayStation 4 and PC by UFO Interactive.

The time of 17 years had passed already after a war of a crystal started with the mankind.

Players will enter a critical phase for the Cristal War.

[Eshiria]
"We've lost contact with North America's Fourth Air Force and their 8th Infantry Regiment. Are there any survivors from the 3rd Infantry Division and 11th regiment? Please respond. They're engaged in battle with the enemy's 18th mechanized battalion army. They're requesting reinforcements. The 2nd and 4th Armored divisions are in retreat. More than half of both divisions are reported to be dead or injured."

There is no end to the reports that makes their way to the bridge.

[Max]
"How long must we wait in the shadows! Why won't they launch the Fighting Thunders?"

The man mutters in an irritated voice. The colossal enemy had suddenly appeared in the heart of North America. This is nothing like the smaller contaminated weapons of the past. During the test flight of the latest, state-of-the-art colossal airship that the army had been developing, it had been contaminated by the crystals. Not only is this a blow to the army's pride, but it is enough to threaten the army's tradition of handling everything on their own. Under normal circunstances, when a contamination occurs that cannot be handled by regular forces, a request for an attack using the Vanquish Crystal Defense (V.C.D) is placed, but they have been left with the order to standby in the background.

[Eshiria]
"Emergency contact from the army. 'Immediatley carry out an attack by Fighting Thunder, assist the North American army, and completely destroy the targeted weapons of destruction.' Those are their orders."

Finally, the attack order to rescue the lives of thousands of soldiers has been placed.

[Max]
"Fighting Thunder. Why even bother with that name? Hey, 'Raiden', did you hear that? It's a little late, but hurry and make your way to the battlefield. I'll transfer each of you the info. Too much blood has already been shed, but we'll do what we can to stem the flow."

In order to speed up their attack by even a little, the ultimate anti-crystal weapons, the treasures of mankind, the Fighting Thunders, have been waiting spread out next to the warship. Like a war cry for the battle awaiting them, their red wings gleam in the sunlight. Like a requiem for the lost souls, their engines roar as they fly off in the sky.

Gameplay in Raiden V is identical to its prior installments as well as Raiden IV, but since the plot of Raiden V is completely different from any former versions, it identifies many real places and many histories that former had been never done before. It contains the raiding of enemies in New York, Middle East, France, the Arctic Ocean, and Sweden. (SHIFT industry does not exist in real life.)

Players may have to select aircraft to run the game like Raiden Fighters Series and Raiden IV Overkill, they are Azuma; aka famous ME-02, Spirit of Dragon and Moulin Rogue. They all have different power, defense, mobility and sub-weapon that need not to upgrade. Unlike Raiden IV, all aircraft has ME-02 bomb.

Interestingly, instead of using previous system, Raiden V has only 1 life per credit that means when destroyed, game is over, instead players have Shield status indicate how much damage taken for aircraft can take before taken down. Different aircraft can take different amount of damage and it can evaluate the progress of players with the same difficulties as well.

Flash Point, the first introduced in Raiden III, has improved from the first to right now. There are 5 levels of Flash Point gauge issue the chain score challenge players have to run for taking the leaderboard. The first level starts 2.0 and ends up to 6.0 for Max Level. Fast killing blow will fill the gauge of Flash Point to reach the next level. Bigger enemies and larger multiplier can fill the larger amount of the gauge. When the killing blow goes slower or stops, the gauge will be depleted for the time. More levels will cause depletion faster. Entering the boss fight will stop depletion only the boss transformation.

Cheer System is the very new to Raiden V since the leaderboard run is the real time game. Online players being as friends can cheer the other one to unlock the skill "Cheer Call". When players get struggle, using Cheer Call will cancel all enemies' bullet at once and allow players to greatly boost sub-weapons for a short time until Cheer Call gauge is depleted. Boosted sub-weapons cause heavy damage and instant attack speed. Cheer Call gauge can increase slowly by progressive play and rapidly by every time player press "Cheer" (Default button Y) to the others who get any achievement of each certain stage such as Sol Destroyed or Boss No Miss. Players who receive many cheer count will increase the cheer call gauge slightly faster so the game calls Cheer; Benefits to Everyone.

Before the game starts, player will choose aircraft for a full course of the game. Different aircraft will have different statuses and the unique weapons on their own.

Before player departure, after choosing machine for a run, you have to reconfigure 3 different kinds of 3 main weapons for any tactical and strategic screen control for a maximum efficiency. Some weapons can be found only in Raiden Fighters series and some weapons are newer to this game legacy.

This weapon system, however, is one of the True Last Boss unlock conditions. Besides clearing all S Rank since Mission 2 and A Rank at Mission 1, all weapons require maximum 10 levels as well. The number of power up throughout the game are 32.

This is the traditional vulcan gun of Raiden series, firing a salvo of vulcan at the fixed variant angles like any former versions. Unlike those, Wide Vulcan in Raiden V can be upgraded 9 times by the first run 3 ways with 2 pellets, then run with 3 and 4 pellets and increase wide range by 4, 5 and 7 ways respectively. When fully upgraded, the frontal shot will come with 2 straight ways instead of 1.

Swing Vulcan is the unique directional shot from Raiden Fighters series and functions more like Layis's standard shot weapon in Caladrius Blaze, shooting narrow vulcan pellets at the enemies with the higher firepower than traditional Wide Vulcan. The special ability of this type is to swing at player's horizontal movements, making it ideal for screen control since the angles are narrower, being easier to do a flash kill. Collecting this will increase range of 3, 4 and 5 ways with 1 and 2 pellets for every 5 levels. The level 6 will reset to 3 ways and a pellet like level 1 again but player will shoot out in twin salvos.

This expert type of vulcan is the most powerful weapon in Raiden V, yet the most difficult to use as effective killer as well. The weapon will run like Swing Vulcan, but instead the wide angles depend on player's vertical movements. This is rather horrible to make a flash kill, but instead of using Laser, this weapon is exclusive for boss killer if expertise it perfectly. Collecting weapon will increase the number of pellets from 2 to 3 and 4 respectively, and increase the power of pellets instead since this type has only 3 ways.

This is another traditional weapon of Raiden series besides Wide Vulcan. Shoot out a narrow powerful blue laser that continuously damage any enemies come across the laser path. Unlike any plasma weapons, Lightning Laser range will be cut whether the enemies come across are small or not. Player's movement will swerve the laser slightly due to lateral weapon beam. Collecting the power up will increase the power and the width of laser.

Charge Laser has lower constant damage than the Lightning Laser, but when charged even on the lower end of the spectrum. I would say it comes very close/or matches the lightning laser's damage out put. The fact the weapon must charged, which is performed simply by not firing for at least as long as the typical medal absorption. So effectively utilizing the weapons advantages over the Lightning Laser takes precise timing and a decent knowledge of what to expect to be at all used at high level difficulty and score play.

. It seems that it is no more than a second, possibly a few frames less. To do the minimum charged shot. When fully charged which takes about 3 seconds, maybe a hair longer it unleashes a devastating beam than essentially fills the whole screen at higher levels dealing massive damage,

The laser which true power comes from the reflection by the blue crystal. It shoots out in 3 directions that rotate 360 degree until end of the shot. The upgrades will be 4 and finally 5 laser beams reflected from the crystal. The Laser can also be used against single enemies like the Lightning Laser.

Or well-known as "Toothpaste Plasma", the still coming back weapon from Raiden II to IV. This weapon appears as a narrow purple beam that can bend to the left or right arcs, catches up an enemies and curves upon movement. All enemies will take damage in the path of the beam and besides main target, an arc can even catch up any other enemies as well. When the target is destroyed, the beam will straight back again until the next target will be caught up. Collecting power-up will increase the width and the power of beam like Laser.

The advanced upgraded of traditional Proton Plasma from Raiden IV using as the easiest, yet most destructive plasma weapon in Raiden V. Which is similar to one of Noah's elemental weapons in Caladrius Blaze. This weapon will fire only short range plasma beams at wide range and comes out with a circlet catcher to find and lock any targets in range. A small units can be destroyed upon catching up while the larger units will take continuous damage from the sight. An enemy can be caught up by up to all plasma beams available, causing rapid damage per second. Collecting this power up will start with 2 narrow plasma beams and increase the number, power and width of beams from 2 to 3,4 beams respectively. A final upgrade will comes up with 5 plasma beams.

This weapon is the inspiration of Raystorm series as well as resembles and works a lot like the homing lasers in Caladrius more than Raiden Fighter 2's Aegis II-c. Playing another important role of flash killing, this weapon will shoot out a salvo of plasma lasers which home any targets on a screen. When the main target is locked, any units in the path of plasma beams behind main targets will be cut through, dealing damage as well. Any beams leaving the screen will be compensated by another shot immediately. Collecting the power up will increase the number of salvo from 3, 4 and 5 beams respectively. Then increase the power, width and the attack speed of Homing Plasma.

In addition to these weapon powerups, there are miscellaneous items as well.

Like Raiden III, in Raiden V, there are only 8 stages with only one loop play, ending the last boss will be cut to the ending scene immediately. Unlike Raiden III, this game can be divided into the different routes. Each route will cause different potential and bullet patterns indicated from the previous player performance. In order to face the True Last Boss "Divine Rampart" you must upgrade all weapons to the maximum 10 levels. 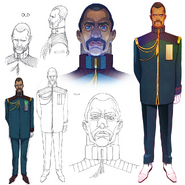 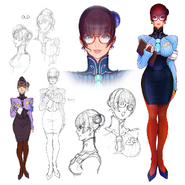 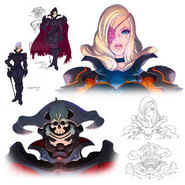 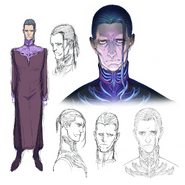 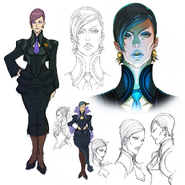 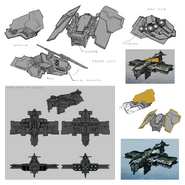 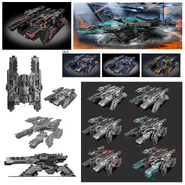 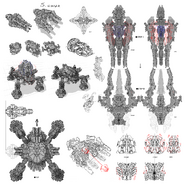 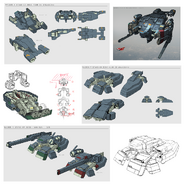 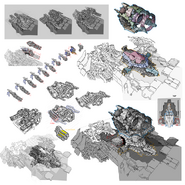 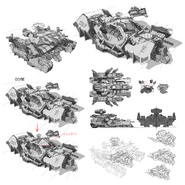 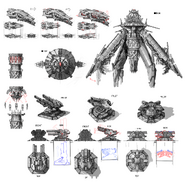 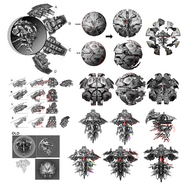 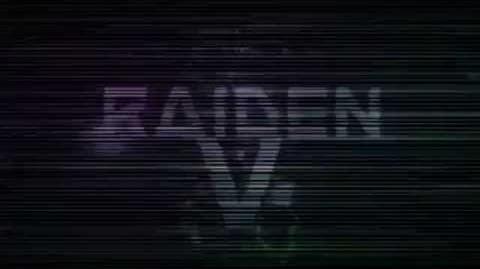 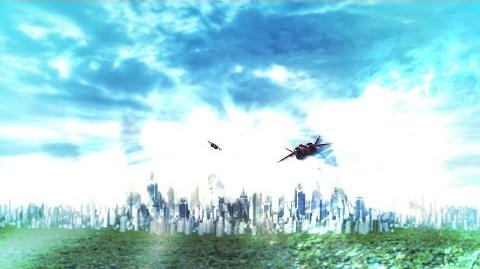 Xbox One 『雷電V』 OP
Add a photo to this gallery

Retrieved from "https://raiden.fandom.com/wiki/Raiden_V?oldid=6561"
Community content is available under CC-BY-SA unless otherwise noted.