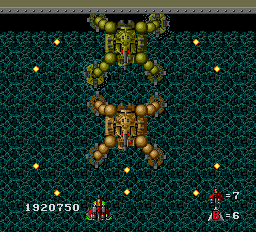 Moonwalkers (unnoficial name) are the first exclusive boss (Stage 9) on the PC Engine version of Super Raiden, they are the improvements of the Desert Spiders and Prototypes of the Death Walkers.

After the defeat and destruction of the Doreineji Core, the player must beat two more stages on the PCE Version, from there, you will enter a new level and a place that produces more Cranassian technology that was being develop on a deeper space of the galaxy. The Cranassians built a Space Fortress from another deep galaxy consists of more advanced enemy units, after fighting all of them, there will be a Water Section that nears to the Boss, the boss are Improved units of the Desert Spiders, called Moonwalkers, they don't surf in sea but allows them to walk Amphibiously.

Unlike these boss, these units are more faster and more harder, so be sure to save a bomb and some Missile Launchers in order to beat them, they have strong HP to deal with them, unlike Desert Spiders, they can still fight back even if their turret is destroyed, so be careful when they're doing this as this is their barrage when they have low HP.

Retrieved from "https://raiden.fandom.com/wiki/Moonwalkers?oldid=6628"
Community content is available under CC-BY-SA unless otherwise noted.