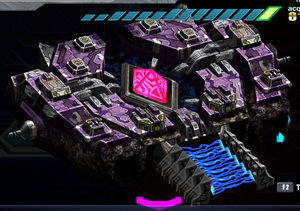 Horda Gestorada starts up its defensive mechanisms of side turrets which launch numerous projectiles around the screen. They may be destroyed, but critically damaging the blue field will destroy all turrets during phase transition. A few rail tanks will also attack during the fight.

Horda Gestorada activates the Red Crystal, generating numerous smaller crystals to launch projectiles at the enemies. The phase ends when all of the small crystals are destroyed.

Horda Gestorada goes critical and launches numerous projectiles around the screen while spinning rapidly. It does not possess much health and a well-timed bomb and focused fire should destroy it before it can kill the player.

Retrieved from "https://raiden.fandom.com/wiki/Horda_Gestorada?oldid=6505"
Community content is available under CC-BY-SA unless otherwise noted.