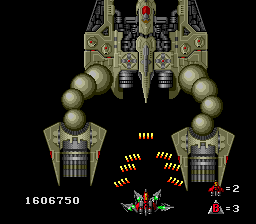 Final Weapon (unnoficial name) is the true final boss in the Pc-Engine version of Super Raiden, its a Cranassian Carrier Spaceship specialized to mine Red Crystals from another Dimension, with 2 Claws, Gun Armamaents and one Escape Ship to fight back.

The Final Boss will be encounter at the Mining showing its own Silhouette on the mining zones of the deep space area of the Cranassian Last Fortress. As seen here, the silhouette reveals as the Cranassian's last hope and final of the defensive lines before it launches from the Last Fortress

The First Phase in this fight are the Claws, the claws fires bullets and lasers and will target your direction, this can be destroyed easily with Missile Launchers, but this are preferred to Homing Missiles if you don't want to get reached by those claws, once the claws are destroyed, you will fight the Spaceship itself.

At this point, you will battle the entire Ship itself, its armed with numerous bullet barrage, and the guns can be destroyed, with all the guns destroyed the main gun will be vulnerable, once all guns and the main gun is destroyed, you can aim for the ship's cockpit, the Ship's cockpit gun fires similar to the Desert Spider but in a more sped-up manner pattern, once the Ship is ENTIRELY Destroyed, the Ship will launch the Escape Pod within it and the Mothership will fadly dim black and fall.

This is the last moment where the small ship attacks you clockwise and very fast, save some bombs for this boss fight and the patterns of this boss are erratically shooting bullets at you, also this ship has middle HP that can be easily destroyed by 3 bombs and a swarm spam of Missile Launchers. 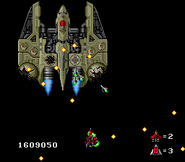 The 2nd Phase of the Battle, you will fight the entire Ship itself. 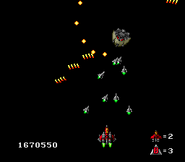 Final Phase of the boss fight. WARNING: Pattern is not required to kill the last phase of this boss. 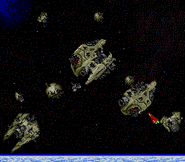 The Debris left from the Final Weapon, the Raiden-mkII Barrel-Rolling from the parts of the Unit. 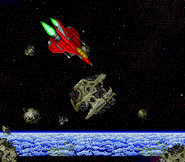 Final Weapon falling from the Earth's Stratosphere, while Raiden-mk2 flying below from the unit's debris. 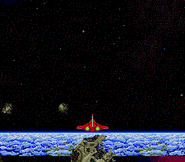 Raiden-mk2 Taking off from Space as the Final Weapon falling from the Earth's Atmosphere.
Add a photo to this gallery

Retrieved from "https://raiden.fandom.com/wiki/Final_Weapon?oldid=6629"
Community content is available under CC-BY-SA unless otherwise noted.