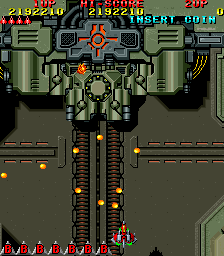 Doreineji Core is the final boss (Penultimate Boss of the PCE Version) of the original 1990 Raiden vertical shooter. It is a Multipurpose Tank Unit with a Red Crystal as the last line of defense, once the Tank is shut down the Cranassians will be gone for good as well as their base exploded into Extinction.

Doreineji Core is a green module with a Red Crystal contained inside. It fights in a traditional manner to many bosses by firing a few random bullets across parts of the stage, with some areas where the player won't be hit, which makes the Doreineji Core an easier boss to fight. If done with a Speed kill the ENTIRE Fortress itself will be destroyed Instantly!

The final boss will wait towards the core of the Cranassian Empire, which the main of the Cranassian's last stronghold, the tank will shoot 8 directions from the start and the Machinery will add the tank some Side Skirt Armor, After reaching the main core it will stabilize its defenses with more gun emplacements, In order to evade this, this cam be prevented by Starburst attack allowing the boss to instantly destroy the entire fortress.

Retrieved from "https://raiden.fandom.com/wiki/Doreineji_Core?oldid=6619"
Community content is available under CC-BY-SA unless otherwise noted.