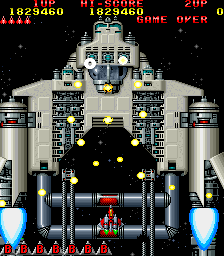 The Antonov Ma-27 is the penultimate boss in the original Raiden.

The Antonov Ma-27 is a large spaceship which is initially attached to the Cranassians Space Station. The boss will take flight after having two turret modules attached to it, starting to shoot at the player immediately after. It is possible to destroy the modules before they attach to the boss if the player is fully equipped. The boss will also be constantly aided by crawling drones which move along the iron bars in the lower portion of the ship.

Retrieved from "https://raiden.fandom.com/wiki/Antonov_Ma-27?oldid=5222"
Community content is available under CC-BY-SA unless otherwise noted.