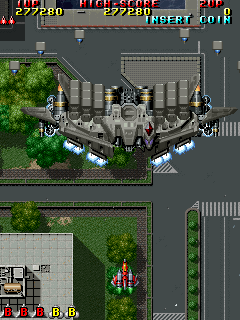 Albatross is the second boss from Raiden II.

The Albatross's power is a built-in energon orb turret, that fires multiple rounds per second. However, the deadly feature of this boss is that it can release multiple miniature drone versions of itself, which have half the brains of a homing missile. It gets even deadlier near the end of its life, as it starts to fire many more smaller versions of itself non-stop, though it can be easily defeated if you have a maximized Laser with Homing missiles.

It will simply launches Kamikaze drones unto you, when it reaches on its Critical State (red flashing) it will mostly Attack like the Flying Fox has. He's an easy boss if you have the Missiles Equipped.

Retrieved from "https://raiden.fandom.com/wiki/Albatross?oldid=5831"
Community content is available under CC-BY-SA unless otherwise noted.